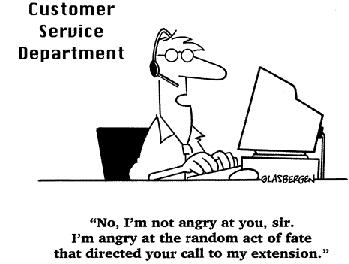 I had a meeting with a government official recently. For the purposes of this column, it doesn’t really matter who, or what department, or even the issue.

My inspiration for today’s spleen-venting comes from comments that very well might have been uttered by hundreds of government officials at any given moment: “We have informal service standards.”

Study after study, from the Canadian Federation of Independent Business, the Institute for Citizen-Centred Service and even Nova Scotia’s own internal government reviews, have found the vast majority of business owners feel government staff are often unhelpful, unaccountable and do not take ownership of their errors.

Serious deficiencies are consistently reported in response times, inspection issues and even matters of common courtesy. Fewer than half (46 percent) of business owners feel they are getting good value for tax dollars and even fewer (43 percent) feel governments conduct their business in an open and accountable manner.

If this were the practice in the private sector, customers would take their business elsewhere. With government, you’re stuck with the cost and quality imposed by whatever customer service standards, or lack thereof, exist within the public service.

The complexity of compliance combined with poor or non-existent service standards can make for a toxic brew because the conduct of business relies on operational certainty. When timelines are not met, communication is poor and compliance or administrative penalties lie at the end of the line, business owners can become justifiably cranky.

There is some good news, however, in Nova Scotia. The office of regulatory affairs and service effectiveness established by the McNeil government two years ago has recognized the issue and is trying to take corrective steps. Its challenge is the magnitude of the problem. This is not about tweaking systems; this is a massive cultural change inside the provincial government.

While regulatory reform and government customer service standards are not the sexiest of topics, they are one of the greatest challenges facing our businesses, as you can draw a direct line between these inefficiencies and the ever-increasing cost of government.

Bill Gates, founder and former CEO of Microsoft said, “Your most unhappy customers are your greatest source of learning.” For governments in Nova Scotia, there is an ample supply of coaches.

Better government customer service is more important now than it ever has been. With a stagnating population and slow economic growth piling a greater tax load upon us all, creating more effective, efficient and less costly government must be a top priority.